Sharon Clark is a Lecturer in Writing for Theatre & Digital Platforms at Bath Spa University and Creative Director of Raucous, an immersive theatre company that fuses performance and creative technology. In 2018 she worked on the BBC virtual reality film, Is Anna Okay? She is a resident at the Pervasive Media Studio and in 2017 was awarded a Bruntwood judges prize for playwriting.

How can creative digital technology deliver anticipation and recall for an audience in an immersive theatre narrative?

To investigate the methodologies that could deliver a personal experience to an audience member hours before they encounter a live performance, and how the narrative ending could be delivered to the audience member hours after the live performance. Researching what elements of narrative design would need to be included, challenges presented to the script writing, which technological deliverers would be most relevant/inventive, and what role augmented reality might play in delivering story outside of theatre walls. 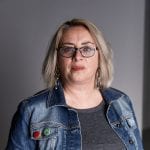