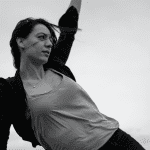 Our Lessons from Now project will support prototyping:

The prototype(s) will feed into the creation of an immersive performance work that explores the origins of loneliness and will be designed to function in stages, galleries, community spaces and heritage sites. A day-long event at Porthmeor Studios in St Ives will enable members of the public to test and respond to work in progress and a short film demonstration will be made available to audiences digitally.

Neon Dance is an internationally renowned, Swindon based organisation that embraces a diverse and digital population; a place where artists, partners and people engage in experiences that are experimental and original, yet accessible to all. Adrienne Hart established Neon Dance in 2004 to develop dance works that explore technologies and design with the body as the central tenet.

The company’s latest work ‘Puzzle Creature’ premiered in Japan at Echigo-Tsumari Art Triennial (2018) and is touring internationally until 2021; access was embedded into the creation and audience experience of the work with British Sign Language, Japanese Sign Language and Audio Description all included. Neon Dance were commissioned to create a site specific version of Puzzle Creature for Setouchi Art Triennale in September 2019 as part of British Council’s UK in Japan 2019-20 season.