Learning from Finland: Automation and the Civic Realm 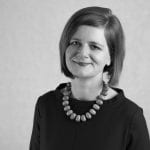 This blog is based on a presentation Ciara gave at the EXiST STEAMM event at Exeter College in Decemer 2019.

Can I take you on this very cold evening to Finland?

Over the past 18 months, in an ambitious civic experiment, around 55,000 (around 1%) of the Finnish population – have been learning about Artificial Intelligence.  Dentists, schoolteachers, parents have been learning the basics and it’s been sparking conversations about how the country – its civic realm and its economy – can use AI to the best and most responsible effect.

The country’s Economy Minister has said “We’ll never have so much money that we will be the leader of artificial intelligence.  But how we use it – that’s something different”.

It’s a fascinating case study for me because, over the past 6 months, I’ve been exploring whether arts and cultural leaders here in the South West (as well as nationally) feel they understand the potential for technologies like Artificial Intelligence and robotics to help transform their organisations.

I wanted to do the Automation Fellowship because until recently I was the CEO of Libraries Unlimited, the charity that runs library services across Devon and Torbay.  As I was contemplating applying for the Fellowship, I realised that, though I could talk a good talk on digital, I actually knew very little about technologies like AI and had even less idea about how they might be used to drive beneficial change within the organisation.

So through my Fellowship, I’ve been talking to leaders of arts and cultural organisations to see if I was alone.  And what I have found through talking to them and through an online questionnaire is perhaps not surprising:

The opportunities for arts and cultural organisations could really be significant, in terms of opening up access to arts and culture to wider audiences and in reducing costs:

And using technologies like this gives us new possibilities to build new art and engagement.  One of the other Automation Fellows Guy Gadney is using AI to power new forms of stories – replayable, interactive conversations with crafted characters.

But the barriers to benefitting from these technologies in arts and cultural organisations are significant too:

Skilling up arts and cultural leaders

My own belief is that there are huge and timely opportunities to skill up arts and cultural leaders:

So what can we do in Exeter?

Well there are such exciting opportunities in Exeter.  We’re a city with a great tech sector and one – with the likes of Tech Exeter, the College and University, plus some brilliant digital organisations – who are willing to play their part in the life of this city.

There’s Exeter Culture with bold and ambitious plans to place arts and culture at the heart of the city.

And we have the new Institute of Technology, which is bringing such amazing digital, data and advanced engineering learning opportunities and facilities to people across the region.

I would love to see all these ingredients coming together in a Finland-style project here in Exeter.   And wouldn’t it be great to link it back to Exeter’s new designation as a UNESCO City of Literature – brokering new networks of writers, teachers, artists, children working alongside Exeter’s tech sector to learn and share new stories, new writing, making sure that our focus on celebrating great writing from the region is not only looking back at the great writers of the past but using digital technologies to forge new forms of storytelling that engage our children and communities.

All of us, who are leading institutions and businesses in the city (and particularly those of us who are not digital natives), have a huge responsibility to lead our organisations ethically and with a firm eye on how the world around is changing.

Let’s see if – with all the ambition and great people we have in Exeter – we might build new ideas and collaborations out of this evening that create a little mini-Finland here in the South West!

Ciara Eastell is one of 24 Fellows currently participating in the Automation Fellowships developed and supported by the South West Creative Technology Network. Ciara has had a long track record working in the public and not for profit sectors. She runs her own consultancy company focused on supporting organisations and senior leaders through major change and transformation programmes.