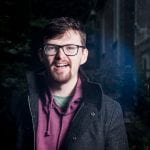 During the first weeks of the fellowship, a lot of talk and excitement stemmed from the need to focus on the ‘onboarding’ and ‘offboarding’ for experiences and how new rituals needed to be developed and to me an obvious analogy for the on and off boarding parts was that of the ramp and slope.

Eventually, I made a few sketches and briefly talked about the analogy during our internal sharing phase in January and it felt good to share. But soon afterwards, I couldn’t find the right way to get the idea across to others in the industry and at the time I felt like I wasn’t the person to be making these kind of statements, which is something I overcame and the subject of another blog which I’ll write on here down the line (I’ll call it ‘New Talent Fellow Syndrome’).

Many creators, makers and producers of new immersive experiences have already designed their own successful rituals and bespoke on and off boarding sequences, Anagram and Limina making particular imprints on me. I’m also super aware of Sharon who has been thinking and reading about on/off boarding a lot, high five to her.

As this year plodded along, I thought more and more about my ramps and slopes and how I could see the benefits of the analogy when using it to plan out an immersive experience journey and how my simple sketches could be used by an interdisciplinary community of experience makers to aid in the creation and facilitation of their work. In this short blog, I hope to expand further on those first sketches I made almost a year ago and discover whether or not it could be useful to others in the industry.

Before I show my first sketches though, I think I need to explain how I ended up illustrating the ‘immersion’ in the sketches.

If our normal state, breathing and feeling the world around us and being relatively present, was represented as a low red line. To me then, a desired state of heightened senses and a high level of engagement could be represented by that red line being physically higher than the normal state.

Here, in an average experience and the red line could also represent an audiences engagement with that experience with the highest point of Flow sitting in the middle somewhere. It’s likely very subjective though so take all this in with that in mind.

I hope that most immersive experience creators have understood the necessity of on and off boarding and I hope that they would desire the audience to have a higher level of engagement throughout the whole experience, not just the middle and so their next step might be to allow for the on/off boarding to be included in the wider experience instead of just a procedure like ticket collection or curtain drawing would be. I know one of Sharon’s jams is all about this idea.

Here are my first sketches, they included some ideas about how we might set up audiences appropriately, including a sense of safeness and giving time to allow them to put headsets on, if needed and orientate themselves. I chose to call those sketches “The Ramp and Slopes of Immersion” because the physical connotations help me reflect on the effort it might take to guide someone up a ramp and down a slope.

And as I’ve spent this year thinking more about it, talking to people, experienced some and created immersive experiences, learned from the network, my MA and from working with Limina, I felt comfortable with the idea that it needs to be thought of in this way and shared.

Particularly while working with Limina, I understood even more so that as well as effort getting folks in and out of immersion, we also need an enormous amount of care.

I returned to those initial sketches and redrew them and reckon I’ve got a pretty good foundation, or a basic scaffold at least, for which we can build appropriate and whole immersive experiences.

There’s no pulling or pushing a person up the ramp of immersion, you need to elevate them using some foundations like safeness and comfort and then guide them from there into your experience using atmosphere and orientation.

These foundations and guides are things I have understood about the process, there maybe different or better words to put there but I believe the actual Ramp analogy is the key. It takes sustained effort, care and attention to get something up a ramp.

It’s very hard to maintain immersion if you don’t maintain the stuff that got you up the ramp to begin with and even then there’s no guarantee people will stay immersed, sometimes it just doesn’t work for some people.

The slope for me is the most important part of the analogy, it really helps to emphasise the effort and care needed to gently guide someone out of an experience in a way that doesn’t outright eject them, interrupt them or on the other end of the scale, leave them in limbo for too long.
If the ways into and out of an experience become easy and the transitions are invisible, it does wonders to help generate way more reflection on the work by the audience afterward.
That’s it for the analogy really, it’s just a simple way of thinking about the humans in your experiences and making sure they get the most out of them.
I’m not expecting this to become some kind of seminal taxonomy (but that would be cool), it would just be nice if it helped a couple of industry folk make the appropriate decisions when making their experiences.