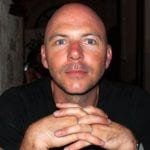 The CAMERA Motion Capture suite at Bath Uni is an incredible place. If you didn’t know about it, you really wouldn’t know it was there, behind an innocuous door at the end of just another 2nd floor corridor in a university building. Open that door and you are greeted by a flank of large computer monitors and behind those monitors is the motion capture studio space itself, a 5m by 5m studio surrounded by a scaffolding frame that is holding dozens of cameras of different sizes, lights, wiring and a tangible feeling of potential magic.

Motion capture studios like CAMERA are truly where new magic happens, and the reality is there aren’t that many of them around. They cost a big bundle to build and a clear ambition to make them the best they can be by having extraordinary staff to run them. In this case Bath Uni have all the above and Martin Parsons is the Head of Studio. Martin has experience across film and television that would be the envy of anyone who worked with him, except you can’t do envy around Martin, he is just such a fantastic guy, easy to work with, friendly and generous with knowledge, stories and cups of tea.

I worked for 6 days over 6 consecutive weeks at CAMERA, motion capturing the Renaissance movement programme in order to measure through biomechanical analysis the changes that happened in my participants over that time.

For many weeks prior to starting I worked tirelessly to get 6 participants from the Bath area to work with me. I was trying to find 6 people who lived in Sheltered Accommodation or similar in and around Bath and, I think because my work is new and I hadn’t developed relationships in that area, I couldn’t find them. I will write another post about this but the reality is that perhaps 5% of emails I sent were replied to. I received 1 phone call in return from probably 15 made, and that only happened because a contact had pushed it to happen. We’re all busy, but it would be nice just to get ‘This sounds interesting but sorry we can’t help’.

As a result I brought to Bath on a weekly basis 2 or 3 of the participants in my Renaissance programme from Plymouth. These were Gillian, Penny and Gloria and they have been moving with me since May of 2018 and were thoroughly up for the adventure. They range from early to mid/late 70’s and are truly inspirational.

In hindsight I am actually glad I didn’t have new people come into the studio with me to be captured. The process of capturing movement has a significant preparation time. The suits are made of a very strong cotton and are stiff and difficult to move. The process of putting the white balls on them then setting them up for capturing is tiring. Sitting around waiting for others to be captured is tiring. I’m glad I had my ladies with me as I knew they would be fine with all the experience and I didn’t have to worry.

The capturing process was fun, and it became one of those bizarre situations where every Friday we found ourselves driving to Bath, getting dressed up in black suits with dots and moved and danced in a strange, green clad and camera filled space. It is amazing what you get used to.

I worked with Dr Polly McGuigan, Senior Lecturer in Biomechanics and Deputy Head of Department in the Department of Health to look at the biomechanics of my participants. Working with Polly it became clear I had made a number of assumptions about this process. I assumed that biomechanics of this sort had been done before. It hadn’t. I assumed that falls prevention programmes like mine had been measured like this before. Mine was brand new and therefore none had been measured. 70+ yr old women captured like this? No.

Step one. What are we measuring? Such a good question. I had the answer to this in my head for months, then suddenly we have motion capture, we have data. What are we actually measuring then?

So we settled on a bunch of metrics. These metrics were based on those that are examined in a lot of falls prevention programmes. First was how long can the balance be held? This is an important one for obvious reasons. Second was examining the range of movement of the upper body. This is almost as important as if a fall happens, we have to be able to respond with our upper body. If we don’t have a range of movement to move within and that will then help us catch ourselves, we will go over.

Legs – Time on balance / maximum distance from balancing foot when on balance / Distances lateral, anterior and vertical of those balances.
This was for what you might imagine: How much time can my participants stand on one leg and does that change over the course of the 6 weeks?

Wrist – distance with respect to pelvis. This was a range of motion indicator, demonstrating further extension of the arm and shoulder

Shoulder – amount of flexion, adduction, extension and abduction. This was to see a change in the range of movement in the shoulder over time.

Trunk movement – rotation range of movement. This was to look at the potential amount of thoracic extension that might have increased over the course of the 6 sessions.

Trunk movement – rotation range of movement. This was to look at the potential amount of thoracic extension that might have increased over the course of the 6 sessions.

What was evident to the eye when watching the footage back was the continually evolving movement choices people were making. Penny was actually spending less time on balance at the end compared with the beginning, but she became more and more fluid and silky in her stepping, continuing to build a beautiful and soft grace with her stepping.

The outcome, in terms of the original Fellowship question is amazing. We have a process within the structures of CAMERA where we can capture and measure change in participants in my programme. We have the biomechanical knowledge of what we are now measuring, we now the process of getting kit on and off and correlating to the system. This was the first time but won’t be the last.

Here is a clip of the movement capture session on the 14th June 2019: