The first residency takes place throughout October. Christian Guerrini is developing a project that allows a large group of people to experience meaningful and immersive pieces of music, performed by themselves with no prior knowledge needed that could result in real feelings of community, bonded-ness and connection between the newly formed groups. Here he talks a little about what his month will look like:

“I will be spending the month developing my ideas for my work “Instancing”. This work involves an immersive musical event where large groups of people can be enabled to sing together, with no prior training or knowledge. The piece is recorded, then played back to the participants joining the circle between performer and audience.

I will also be developing work that will be shown by the end of the month in a site specific context and also works that will go on to take place at Glastonbury festival in a venue called “The Rabbithole” where I have a creative production role.

I am currently beginning my third year at Falmouth University on the Creative Music Technology degree course. Taking this time to reconnect with an academic side of music has given me fresh impetus to examine where my music practice integrates with others, reassessing what function my work performs.

At the beginning of 2019 my research started to take me in the direction of expectation and reward, theory of affect and immersive experience. I’m interested in why when one plays a favourite latest song to a friend it never ever sounds the same as when one hears it oneself previously. I’m interested in the transaction of performer and audience and whether roles can be reversed, if asking people who wouldn’t normally want to become participant can be persuaded given the right contextual cues that make it ok. If you can get middle aged men to sing at the top of their lungs at a football match, why not in other cultural settings? What is it that allows us to break cover.

This process led to studying about community, group singing and I developed a model that would allow total novices and large groups of people to sing together, a musical piece involving complex harmony. It is this continuing work that won the “Edge award” from Falmouth University at the end of my 2nd Year, encouraging me to take the idea further.

I have since brought the piece to eight primary schools in west Penwith, with the help of the Cornwall music service trust. Of the many outcomes that I noticed, it was that singing in groups has an undoubted uplifting effect and that every group seemed bonded together.

During the summer, I also performed the piece at Port Eliot festival and in the town of  Les Eyzies in France outside one of the prehistoric caves and in the entrance foyer to the National Museum of Prehistory.

I hope the residency will allow me to explore feelings of being bonded with those in a room, in a group. To explore how groups become groups. Grouped. “ 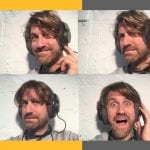