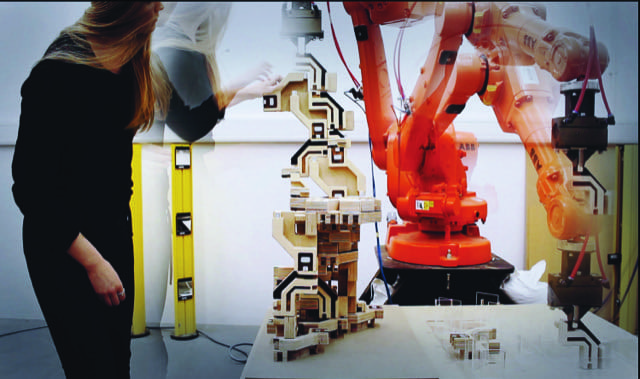 The prototype ‘The Collaborative Construction Platform’ is a response to current trends in architecture and construction: the increasing centralisation of production to few large-volume builders, the predicted loss of over 680,000 jobs in the building trades in the UK by 2040 due to increasing adoption of automation in construction, a industry-wide productivity lag since the mid-20th century and an existing skills shortage that is even further affected by construction being avoided by the first generation of digital natives that are entering the workforce in favour of other forms of work that are less dangerous.

The prototype will utilise Augmented Reality (AR) and industrial robots to develop a platform-based application for iOS (mobile and tablet) that both enables the preservation of traditional skills and techniques as well as enhance the skills, capacity and quality of design outputs available to workers in the building trades using robotics. AR will be used to encourage experimentation with design possibilities in real-time with live demonstrations, while an industrial robot will be used as a prototyping ‘companion’ capable of capturing, replicating and improving capacities and efficiencies.

The prototype aims to create opportunities for new kinds of jobs in construction that are safer, enhance the capacity of tradespeople to contribute to growing technological change in the industry and encourage localised investment in digital tools to decentralise automated production methods in the trades. The application will be developed and co-designed in collaboration with tradespeople from across the SW who, as a cohort, will be diverse in construction experience and digital literacy, creating opportunities for the cohort to develop new skills and expertise in surprising ways.