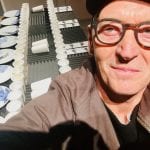 Throughout the continuing, bleak COVID pandemic and all the other issues that have arisen from it and through it, there has certainly been more time for reflection. For me, part of that thinking time has been challenging, how we think through our personal lives and how the datafication of those lives, might influence creative production and why. Some of my past creative work has touched on these issues before, but in more oblique and ambiguous ways. This focus on the personal has also been inspired by ideas surrounding collective feeling or sense, that we seem to be living history differently somehow and our inheritance and construction of cultural conflicts, traumas, and values, seem linked to political events, outside of our control and our locations, it is all pretty hard to untangle.

‘to value what is invisible: a group dynamic, a social situation, a change of energy, a raised consciousness’ (Clare Bishop, 2012)

As a child, my life began on a council estate in the West Midlands, my parents were economic migrants, they had come to the area from Ireland and Wales, where their own histories go back several hundred years. One second generation the other first generation, both had experienced complex journeys to get to the West Midlands plateau. From North Wales to mid Wales and over the border, from Ireland via Egypt to Africa then the UK, where they met in their twenties. Like most of their generation their personal experience is charted by rubber stamps on old passport, faded documents, letters, antidotes, photographs, clothing etc., material data not digital data. This sheds light on the relationship between the inseparable elements that shape our sense of self, both through collective history and private experience. Soon after I was born, my father suffered a massive breakdown and was sectioned, so my life and that of my mother’s was hugely changed. She became a single parent with all the stigma and difficulties of the time and I became a difficult child. Although my father returned once or twice a year to the family home, it was not ideal and eventually after a few years, he never returned.

During lockdown I have explored the signification found within archival traces as well as becoming aware of how malleable the nature of personal identity is and sometimes how radically arbitrary at the same time. I worked through various harrowing documents, where I came across items that constantly drew attention to questions and issues of identity and belonging, comprised of various documents, photos, and other pieces that called for examination and a re-evaluation of identity using history/data, as source material, these all with references to migration and integration, destabilization and embedded structures of legitimacy within citizenship through identification. I get the fact that identity is the way we perceive and express ourselves and that factors and conditions that an individual is born with, such as ethnic heritage, sex, or one’s body, often play a role in defining identity. However, many aspects of a person’s identity change throughout their lives. People’s experiences can alter how they see themselves or are perceived by others. Conversely, their identities also influence the decisions they make: Individuals choose their friends, adopt certain fashions, buy certain products, and align themselves with political beliefs based on their identities.

So, how can creative producers use data to express, explore, and question ideas about identity. How do we create work in response to all these multifaceted identities? When my own behaviour stated to challenge convention, with disruption, aggression, obsession, when I was around four or five, the local council deemed it necessary to remove me from our home and place me in several, high status, public schools, where I remained until I was expelled at sixteen. The data available to validate these decisions is sketchy at best and it certainly changed the course of my life and that of my mother, I think it suggests that the problems society faces are as a result of intersecting forms of discrimination and the ways we behave and express ourselves are shaped by the cultures in which we participate. I expect this backs up the ideas of the mid-twentieth century, philosophers, social scientists, and historians, who have put the case that characteristics, and activities that distinguish us are not innate, but socially constructed.

Maybe as we move forward and we constantly construct our own digital data and are observed by non-physical data gathers, we can remind ourselves that they don’t really see us! And although we are witnessing a great reshuffling of the old binaries of author, spectator, art, life, leading to de-alienation in both art and society, with data technology seen as a system, there is still what is invisible. I expect this could be construed as necessarily neutral and the individual, the ego are not great companions to a social critique, but I would argue that these are constantly in flux, within the creative process.

So, here is a call out to those that make, to those that care about making, to those that do-stuff and to those that shock, enrage and maybe even delight us into new possibilities, cheesy, kitsch and artificial though it might be, the real human capital, the human narrative.