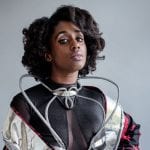 Over the last year I have been exploring approaches to the creation of accessible immersive tech art spaces. In this series of blog posts I will share the research and lived experience that has underpinned this as well as the art that has been created along the way.

For more information about the work it has spawned, visit www.nwandoebizie.com

It is a space full of spaces.

In all its amorphous blossoming it contains universes of parallel realities.

One filled to the brim with visual noise – a pointillist painting come to life and spread across the sky.

A landscape littered with landscapes.

Its existence poses questions about the nature of reality.

As an experience, it suggests a physicality to the intangible.

Like a rumbling gif it reveals the cross-modality of the senses.

The world of Visual Snow is rich, never still, broken and breaking over and over again.

Past is overlaid onto the future. Reality is Augmented.

As such it offers powerful insights for the possibilities of an augmented reality environment.

Visual Snow is a labyrinth offering the person submerged within its walls a never-ending journey.

It is a framework for stories to tell yourself about yourself.

Illness, neurodiversity, magic, Sci-fi – all are possible mythic palettes from which to paint the colours of your own story.

It is a patina, rough and raw, scratched across your eyelids that reveals your individuality. A mark. It says – this is what the brain is and how it works.

Visual Snow is an ocean. It is a black Atlantic. A sea of possible interpretations.

The sea beneath the sea

A dream within a dream.

Visual Snow is a ghost plane – a waste land of broken fragments signifying nothing(?) of the more solid world.

The ghost fragments dance and fade. Play like spectral children and half forgotten melodies. A haunting.

Visual Snow is a time machine

Visual Snow is a shadowland

Of all these things, Visual Snow is, I made an immersive technology exhibition of.

To see – if I were to hold up this mirror of infinite regress, if other’s perceptual realities would be held up against mine own, what would they see of themselves? What would they understand about the nature of a shared objective reality and their relationship with ideas of normality.

I met a wonderful elder woman at Distorted Constellations. She came with three generations of her family and watched how her grandchildren interacted with it. She described how one granddaughter closed herself off and refused to leave. And how another one did something so out of character, so character developing, that herself and the child’s parents were astounded.

She pleaded with me to take the exhibition to ‘the inner city’ to places where children don’t have grandparents to take them to an art gallery on a Sunday afternoon.

Visual Snow is a revelation of an unknown world. A parallel universe living side by side, revealing that we all inhabit our own, just without reach of the next person.

Visual Snow is a denial of absolutes. There is no black for somebody with Visual Snow (indeed, a common cause for very real distress for people who have a sudden onset of Visual Snow is the fact that they will never again see the colour black) and there is no white. Apparently I have never seen those colours. There is no opacity.

All of space and matter and stuff are connected by a never-ending stream of content. Information. World without end.

Visual Snow is a piece of electronic music.

She who experiences Visual Snow realises that reality is constantly being repeated, matter distorts and bends and she creates herself.

She finds Visual Snow at the intersection of ritual, myth and neuroscience. A neurophenomenological approach makes sense.

She sees herself repeated a second behind herself. Another self is next to herself.

Another self is another possibility of what one could be. It is self in a parallel dimension. It is she if she had only…

She sees her mirror self in an infinite regress of possible possibilities.

What Ben Okri in A Time for New Dreams calls

A bright vision of what can be