Where are you really from? New podcast and blog tell the stories of black and brown people in the south west 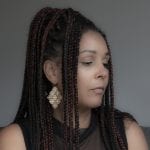 I’m Louisa Adjoa Parker and I’ve recently launched a new podcast series which explores the experiences of people with African, Asian and other non-white heritage in the rural south west. I created the podcast and associated blog as part of my research as New Talent Immersion fellow with south west creative technology network (SWCTN). I hope that by sharing these stories with the wider white community, it will enable them to learn about some of the issues ethnic minorities visible by colour can face in rural areas.

I’m of English and Ghanaian heritage, and I’ve lived in the west country since moving to south Devon in 1985. I’ve since lived in west Dorset and south Somerset. I was interested to explore how the unusual experience of being black or brown in rural spaces can be communicated via creative technologies to the wider white community in a way they can understand. My research has strengthened my belief that it is possible to imagine how it feels to walk in another’s shoes; although we may never fully understand another’s life without living it, we can grasp the essence of their experience. We can all relate to how it feels to be an outsider.

To get the project going, I developed some publicity: I worked with a designer to create a flyer, and sent out press releases. My aim was to reach members of the public interested in telling their stories. I’ve had a lot of interest, but it has been challenging at times gathering the stories! People are very busy, and it has taken some time from initial communication to the finished outcome of blog or podcast story. I also realised along the way, that as I’m a writer, telling my story comes easily to me, but everyone is different and others might not find it so easy. As well as this, the stories are sometimes difficult to tell. One of my interviewees cried during our interview, and told me after listening to the podcast:

“For the first time in my life I could listen to my own voice, maybe because I was telling my truth, thanks to you. Absolutely wonderful. I feel you have honoured all three of us by producing it so well and adding sound that reflects our words.”

Talking about a lifetime of experiencing racism, sometimes for the first time, can be traumatic, yet (I hope) also healing and liberating. I’ve certainly found this when telling my own story.

My fellowship has involved collaboration with other creatives, who, along with the people who shared their stories, have helped bring the project to life. I worked with musicians and sound technicians Femi Oriogun-Williams, Gary Pickard and illustrator Kech Wo. Femi and Gary helped with editing, mixing, recording and training me to work with audio. Prior to this project I had no idea how to work with sound, and although I’m not yet an expert, I have learnt a lot and hope to go on and develop my audio skills. I worked with Kech to create a logo for the podcast, and I was really happy with the striking result.

The series was first launched to the public at Mikrofest in Exeter, and I had some really positive feedback from listeners.

I produced episode 1 with my co-presenter Femi Oriogun-Williams, a musician and podcast producer, who grew up in Dorchester. We interviewed three people from Dorset, and reflected on the different experiences of life in white rural landscapes, and the importance of people’s non-white cultural heritage.

In episode 2 I interviewed three women, who like me are of mixed heritage, about their lives in Bridport, Cornwall and Somerset. The episode explores overt racism as well as the more subtle incidents, such as people touching your hair with or without permission. Two of the women are a lot younger than me, and I was saddened to hear they’d experienced similar racism to what I’d experienced growing up in the 1970s and 80s.

I’ve been writing about black and minority ethnic peoples’ stories for some time, and believe we need to be talking about race more in the south west. Nationally there is a current conversation about this in the media. The experiences had by people of colour won’t affect many white people in the south west, and many believe such issues belong in urban areas. But for people who aren’t white, it can be challenging negotiating our everyday lives and identities when we don’t see ourselves reflected in the landscape around us, and more often than not, experience racism.

I found some of the stories shocking, and although I tried to be emotionally detached, I’m only human and it was hard to hear about racist assaults and violence: the Muslim woman a lorry driver drove at; a young girl who had adults throw stones at her; a physical assault after the European referendum. And then there is the constant, draining, seemingly harmless form of racism, which often comes from white people with good intentions, who have no idea how it feels to constantly be questioned, touched, treated as though you are ‘other.’

I’m currently working on a presentation about my research which will be shared at the showcase event in July, and I hope to make this available to the public at a later date. Although my research is winding down now, I hope to develop this project later in the year, and I’m still keen to hear from people interested in telling their stories.

If you’d like to tell your story, or have any comments on the stories that have been shared, contact me via the blog: www.whereareyoureallyfrom.co.uk

Listen to the podcast: https://soundcloud.com/where_are_you_really_from